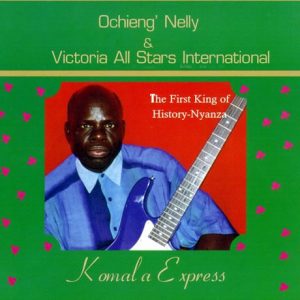 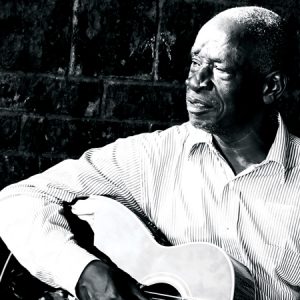 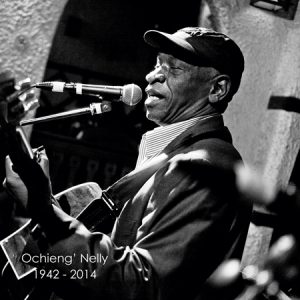 Ochieng’ Nelly was born Nelson Ochieng Orwa in 1943 in South Nyanza.
He began playing the guitar in his teenage years after being taught
and inspired by the pioneering Congolese Musician Adolf Banyore.
Ochieng’ Nelly got his first guitar in 1961. He travelled widely through
Uganda, Congo and other African countries. He was widely exposed to
Congolese guitar playing styles. He developed his own unique playing
style that was later a big influence to the sound of The Ogara Boys Band,
and Benga music in general.
Nelly worked with his Congolese mentor for a while before joining The
Ogara Boys Band in 1962. The Ogara Boys Band consisting of founding
member John Ogara Odondi and Aketch Oyosi was formed in 1960. Together
the trio started and developed a unique sound that got the name Benga,
in 1963. In 1966, Nelly left Ogara Boys Band to pursue his career
elsewhere. He briefly collaborated with another Benga legend, George
Ramogi. Ochieng’ Nelly has produced several songs such as: Monica Abio,
Ombua Akelo, Celestine Juma, Samuel Aketch among others.His story is
featured extensively in the Ketebul Music produced documentary: Retracing
The Benga Rhythm Through Ochieng’ Nelly’s music, the legend of yester
years Benga , still lives on.
( No-Nation )

passing of a legend
Discogs