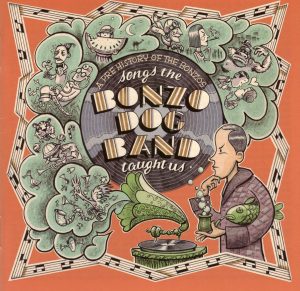 The Bonzo Dog Band (also known as The Bonzo Dog Doo-Dah Band, The Bonzo Dog Dada Band and, colloquially, as “The Bonzos”) are a band created by a group of British art-school denizens of the 1960s. Combining elements of music hall, trad jazz, psychedelic rock, and avant-garde art, the Bonzos came to the attention of a broader British public through a children’s television programme, “Do Not Adjust Your Set”. After three reunions read more ..

01 – Leslie Sarony & Jack Hylton – Jollity farm
02 – BBC Dance Orchestra – Micky’s son and daughter
03 – The Savoy Havana Band – I’m gonna bring a watermelon to my girl tonight
04 – Jack Hylton and his Orchestra – Button up your overcoat
05 – Percival Mackey and his Band – On her doorstep last night
06 – The Rythmic Troubadours – Ali baba’s camel
07 – Jack Hylton and his Orchestra – By a waterfall
08 – Hal Swain and his Band – Hunting tigers out in india
09 – Albert Whelan – My brother makes the noises for the talkies
10 – Jack Hylton’s Jazz Band – Laughing waltz
11 – Whispering Jack Smith – All by yourself in the moonlight
12 – Noel Coward – A room with a view
13 – Bebe Daniels & Ben Lyon – Little sir echo
14 – Jack Payne and his Dance Orchestra – Make yourself a happiness pie
15 – Jay Wilbur and his Band – We’ll all go riding on a rainbow
16 – Billy Cotton and his Band – Skirts
17 – The Continental Five – The sheik of araby
18 – Jack Hylton and his Orchestra – Bell bottom trousers
19 – Jelly Roll Morton’s Red Hot Peppers – Dr. jazz stomp
20 – Ray Starita and his Ambassadors – The flys crawled up the window
21 – Jay Whidden and his Band – I lift up my finger and I say ‘tweet tweet’
22 – The Savoy Havana Band – Masculine women and feminine men
23 – Leslie Sarony – Misery farm
24 – Roy Leslie – Omar khayam’s cave
25 – Jack Hodges the Raspberry King – Everything is fresh today
26 – The Savoy Havana Band – Last night on the back porch
27 – Guy Lombardo and his Royal Canadians – I love to bumpity bump (on a bumpy road with you)