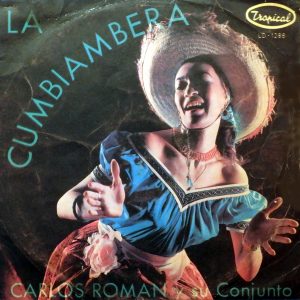 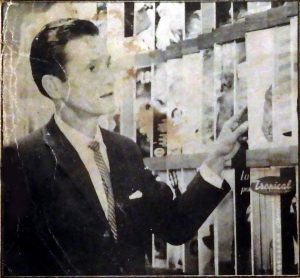 I first discovered Carlos Roman through his hit song ‘Very
Very Well’, must have been around 2000. It was on ‘Lo Mejor
de 14 Cañonazos Bailables Vol. 1’. Over the years a few other
songs popped up along the way. When I was visiting some
of my friends in record collecting yesterday, I found this here
album with Carlos and his Conjunto. Super nice and rare lp
I couldn’t resist buying and share with you. Carlos Roman
mixed traditional styles such as cumbia, charanga and
merengue with twist and rock. Incredibly happy party
music from Colombia’s 60’s. No exact year is known.
I have added a few other songs to complete the fun .. 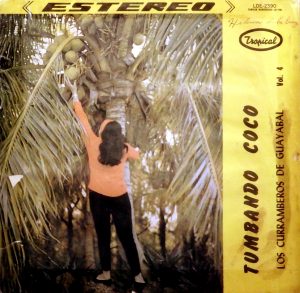 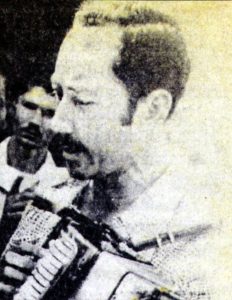 On this album with Los Curramberos de Guayabal we find
singers Adolfo Echeverria, Alberto Pacheco and Anibal Velas-
quez. Gabriel Romero also used to take part in this group
but not on this record. The singers all had extensive solo
careers later. We find Anibal Velasquez singing El Bobo
de la Yuca, by Beny Moré. Other famous songs are
Rosa Maria, La Luna y el Mar, Cumbia del Caribe
and La Banda esta Borracha. I have added a
couple of different versions as a bonus ..

That ‘Los Corraleros de Majagual’ album of yesterday alone
was already downloaded hundreds of times. I guess it is time
to catch up with some of their older records. I’ve got a bunch
of them waiting, let’s see ..
This one is from 1967 and contains some of their greatest
songs ever. A few of them have appeared here on earlier
occasions but we also find songs that we didn’t have yet.
Tropical de Colombia like Paseaíto, Pompo, Pasaje,
Charanga, Son and Bolero, enjoy listening ..

In 1977 the album was re-released. On this re-issue two
songs were replaced. ‘Hay que gozar’ and ‘Mejor que te vayas’
were replaced by ‘Sarita’ and ‘La minifalda’. I have added Sarita
as bonustrack. ( see other picture, also in the file) 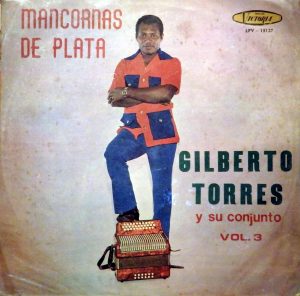 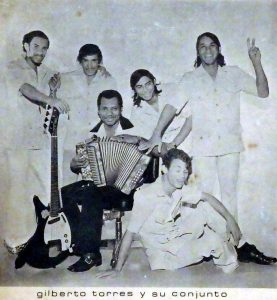 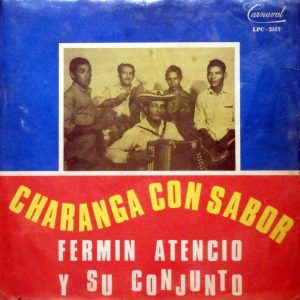 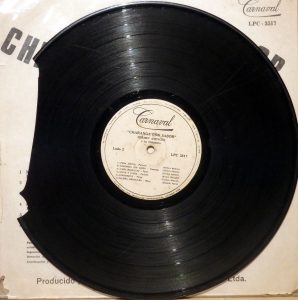 Until now I have posted four vallenato albums this past week and
giving space to six better known artists. The other three days I think
it is a good idea to lend the stage to some lesser known but wonderful
artists. Today I’d like to introduce Fermin Atencio. Unfortunately we can’t
find anything about the man on the world wide web. We’ll have to settle
for the music only.

This elpee is so thin that when I was cleaning it I broke it.
The first three numbers were destroyed. I was lucky I already recorded
track one and two. I didn’t want to cancel the post completely so I
recorded the tracks that were still okay. We lost four tracks. 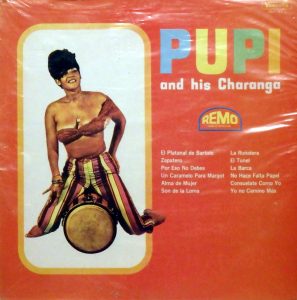 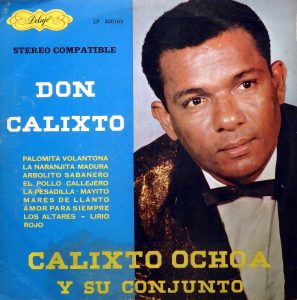 I guess yesterdays post was a bit too much for some. Let’s get
back to the music everybody can handle. Calixto Ochoa already
found a crowd of enthusiastics the last time he visited us here. 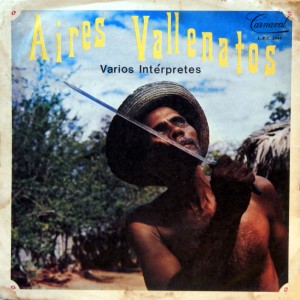 On monday july 13 I posted ‘Sabor Costeño’, an album with
five artists of which we find back three today. This is an lp
with 6 artists on the same label and from one year earlier.
Heliodoro martinez is the guy that hit me the most with
his great voice. The others however do not disappoint
as well. Going to Colombia for some crate digging is
something I’ve got on top of my wishlist.. 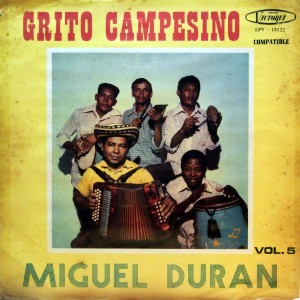 Hello, goodmorning, One of the best vallenato tracks I ever heard
was without doubt ‘India Matea’ by Miguel Duran. The album which
contains it is still on my most wanted list though. If you want to hear
it, you can find it on the lp ‘Fiesta Vallenata’ obtainable at this page.
For now, we’ve got us another record by Miguel Duran, it is from ’74
and appears on Victoria. Jivin’ rhythms and squeezebox ..guepa je.. 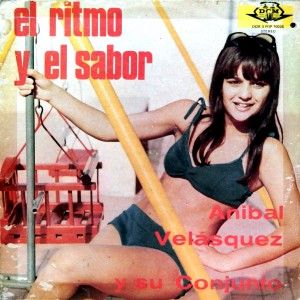 Anibal Velasquez produced a huge pile of records. My
collection contains a bunch but there’s so much more
yet to discover. Today we have an album from 1978 on
which he appears multiple style, paseo, paseaíto,
cumbia, Ritmo cundé, charanga and pasebol.
Anibal still performs, it seems I missed him
when he was touring my country some
time ago. Who knows we’ll get
another chance.
Listen.. 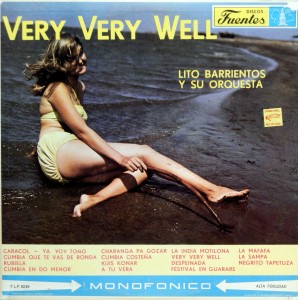 Hello good morning, we are lucky to find a sunny day this
morning, spring is about to begin in the Netherlands and
that’s always a very nice time of year. The magnolia in my
frontgarden is almost bursting open, something we wait for
all year. Sunny weather asks for sunny music, let’s see..

This is the first appearance of Lito Barrientos at this page
and it contains some fine tunes. It brings songs in various
styles like cumbia, bomba, charanga, corrido and porro.
A typical slice of tropical Colombian sweetness, complete
with ‘mosaíco’, a range of songs melted together at the
end of the album. Get it now and listen yourself.. 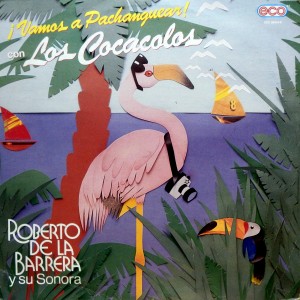 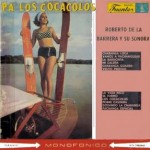 It’s a re-release from 1990 on Discos Fuentes, originally
released in 1965. It was one of the first contributions to
Colombia’s salsa movement. The small pic shows the
original cover of the album. Pachangas and charangas
con los Cocacolos, give’m a spin and a push.. 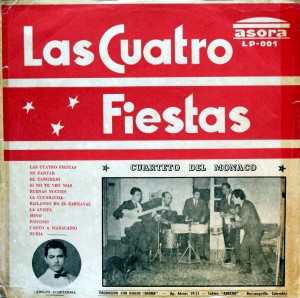 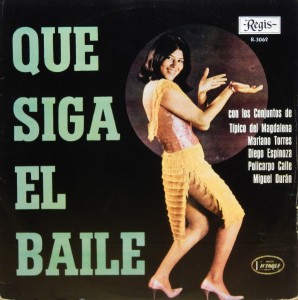 Good morning groovers, I wasn’t able to see downloadnumbers exactly
as they are since the new page has come active. My engineers have
made it possible now and I must say it brought me some pleasant
surprises. For example, I did not expect Ases del Ritmo in our top 10,
same thing counts for Global Sampler vol. 43. It is on number 14, not
bad at all. The numbers give me an awesome insight on what’s most
popular here at the GG. I always figured that the albums that gained
the most comments were also the most downloaded ones but that
isn’t the case at all. This information is very valuable to me, it
helps me determine what to post.So lovers of Colombian music,
I am happy to see so many downloads in this section.
Enjoy this fine collector which contains
a number of great songs.