Conjunto Chappottín and his Stars was founded in 1950: African
Cuban tres-guitarist, composer and bandleader, Arsenio Rodriguez,
known as el Ciego Maravilloso, or the Marvelous Blind One, had settled
in New York to recover his vision. He decided from there that his All Stars
band, which he left in Cuba during his 1948 move to New York, should be
transferred into the professional care of his first trumpetist, Felix Chappottín.
From that moment, the original Arsenio Rodriguez All Stars band was
transformed into Conjunto Chappottín y sus Estrellas. The group was Led by
Felix Chappottín with Luis (Lili) Martinez Grinan as the arranger and Miguelito
Cuni the lead singer. Under the leadership of Felix Chappottín, only to be
compared with Louis Satchmo Armstrong, the band rose to international
fame, moving and amusing dancers in different parts of the world.
( info from AfroCubaWeb )

I bought this lp from a friend who used to collect Cuban music with passion.
One day when he was in need of money, he sold me his entire collection
with the idea to buy it back some other time. Unfortunately Dirk has left
this world a couple of years ago. I am taking care of the music, keeping it
together and sharing some of it with you, like today. Hope U like.

I found that the same lp was also released with
a different cover, as shown in small picture,
don’t know which one was the original. 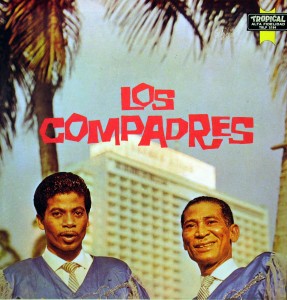 I didn’t hear any complaint about not having that Soundcloud-player
anymore. I suppose nobody really misses it. Maybe we’ll have
another player some day, for now just download and listen.

Duo Los Compadres was formed by Lorenzo Hierrezuelo in 1947.
Second voice and ‘tres’ was taken care of by Compay Segundo.
We hear them performing on this album which was a re-release
from during the seventies. Can you tell us the year of the
original release ? Listen and enjoy in the mean time. 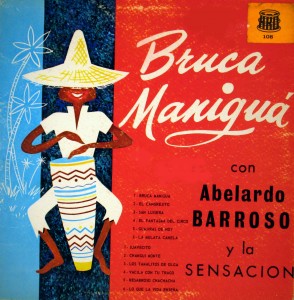 Abelardo Barroso y la Sensación were an institution
within the marvelous music of Cuba. In their days
this was a famous record and today it is pure history.
It goes for rediculous prices on the web so, take it
and listen to this rarity free of cost. 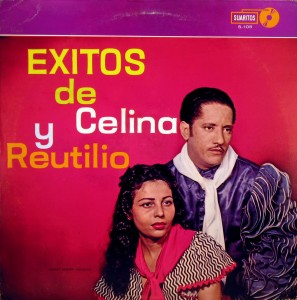 One of my favourite latin voices belongs to Celina Gonzalez.
Together with her husband Reutilio they form this historic duo.
On Suaritos we have this delightful album, it contains some
of their all time greatest songs. La casa de Yagua for instance,
or Cita en el Platanal, are just two of the 14 magnificent tracks.
Glad to spread the word on this splendid LP, Get it now ! 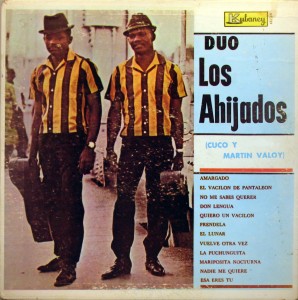 Happy New Year to all of you !
Thank you for your kind wishes and let’s make 2011
a new musical share-year like none before, long live the internet.
To start off, an album on Kubaney with music from the Dominicans.
Brothers Cuco and Martin Valoy are back with a fine LP of son and
guajira. Recover slowly with this laid back latin sound. 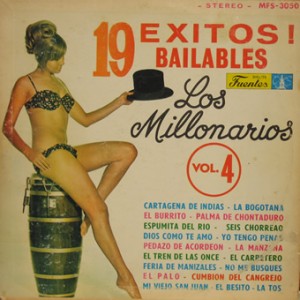 Here’s a post, especially interesting for it’s collector’s value, more then
for it’s musical value. ‘Los Millonarios’ played instrumental versions of
well known songs. For instance, ‘No me busques’ of ‘Los Corraleros
de Majagual’, or ‘El carretera’ of ‘Guillermo Portabales’. It gives an
impression of all the styles played in Colombian music. And as always,
‘Discos Fuentes’ brings a cover with a pretty girl. Check back cover
for style info. Attention : Track no. 1 jumps one time ! 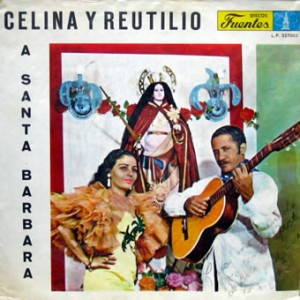 When I am hunting for records at a fair for instance, I am always
looking out for anything on ‘Discos Fuentes’. one of those days I
was the lucky finder of this rarity. Celina Gonzalez and Reutilio
Dominguez are Cubans, this is a Colombian release that
contains some of their early successes.