Last oktober I posted an album by a dear artist from Amsterdam,
the city of my ancestors. Johnny Jordaan is still a hero of the
old days and has sentimental value to me. He used to sing with
this fine lady. Tante Leen and Johnny Jordaan are unforgettable
and there’s even a Johnny Jordaan Plein ( square ). Funny enough
I bought this LP today in Utrecht instead of Amsterdam. The music
is typical for the ‘Jordaan’, an area in old Amsterdam. Music quite
different from what you’re used to find here. Tante Leen had her own
little café where she used to sing for the public, the only day she
didn’t sing was when Ajax played at home. Every fortnight on sunday she
was in the Ajax football stadium cheering for her club. 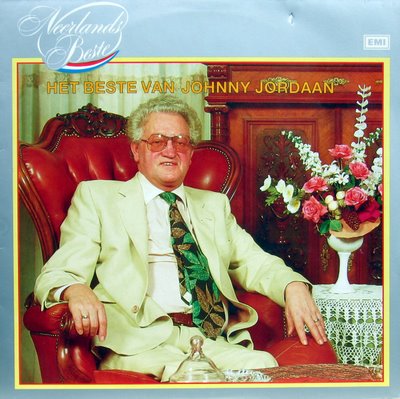 I use to post ‘music for the people’ of many country’s.
This time I want to introduce a Dutch singer to you, one I
really enjoy listening to. This is typical music from the
Amsterdam neighbourhood, ‘de Jordaan’. The album is from ’85
but the recordings are made between 1954 ( track # 1 ) and
early 60’s. Johnny Jordaan had huge succes late 50’s, his music,
though sung with enormous Amsterdam slang, was played throughout
the Netherlands. I always loved it, something quite different
for once. Hope you appreciate.