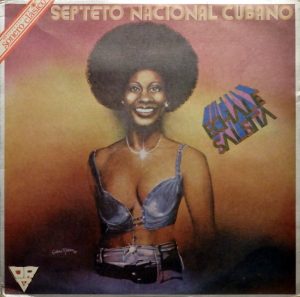 What do you think about some Cuban son for this sunday ?
We had three records and one cd so far. Most of the albums
I found with them contain doubles, songs that also appear
on others. On this Colombian release on Discos Orbe only
a few. Here in the Netherlands we have grey and wet
weather today, an album like this may cheer up
your mood. Get, spread and enjoy listening .. 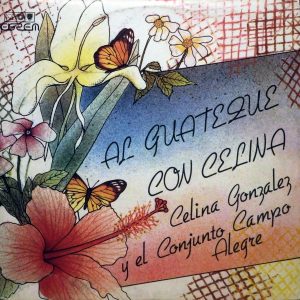 A voice you recognize from thousands, so fresh and bright, that
is the one of Celina Gonzalez. No matter what song she picks, it
always sounds wonderful. On this record from 1986 she appears
with Conjunto Campo Alegre led by Félix Martínez. Metales y
cuerdas: Orquesta Egrem. From beginning to end a stunning
album, a piece of Cuba at its very best.. 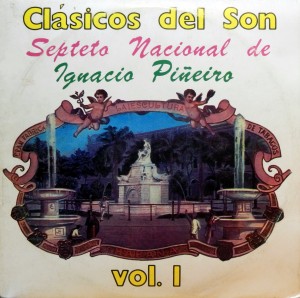 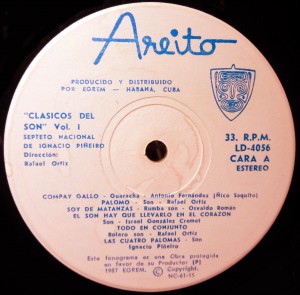 My buddy René went to Cuba with his daughter, they
travelled around for two weeks and came home with
some real nice lp’s. Take this one by Septeto Nacional
de Ignacio Pi؜ñeiro, I fell for it straight away. What a
stunning record, the son is just breathtaking. I don’t
know about you, better get it and listen instantly,
once you’ve heard it there’s no turning back.
Thank you so very much René,
you’re the best..

One of the key figures in latin music was this great man.
Arsenio Rodríguez is considered father of the modern afro-cuban
sound. His musical roots lay in the Congolese rituals of his
family, instilled in him by his grandfather who was a slave,
and it is said that he brought many of the toques used to
adress deities into son. He was a predigious composer –
his sones remain dominant in the repertoire – and his group,
which he expanded with first congas and later an extra trumpet,
more percussion and piano, became the most influential of the
1940’s. Rodríguez also changed the structure of son, expanding
the montuno with a descarga section of improvised solos.
Arsenio Rodríguez ( 1911 – 1970 ) was blind from age eight,
he was kicked by a horse. He was a superb tres player and one
of Cuba’s all time great bandleaders and son composers. Arsenio
grew up in a ‘solar’, a small neighbourhood community. It was his
custom to play the guitar, his neighbours would join in both
vocally and instrumentally, using sticks, pieces of chairs, boxes
or anything they could find to create a musical sound. On such
a night, someone used a cowbell as their contribution to this
primitive music and it was from this that the cowbell evolved as
part of the instrumentation of today’s Latin-American rhythm
sections. ( Rough Guide and backsleeve )
Congolese composer Grand Kalle was called the father of rumba,
he became inspired by Cuban artists like Arsenio Rodríguez, so now
we can see the circle close, afro-cuban getting round and round.
tracks like Independence cha cha and Africa Boogaloo are typical
examples, from Congo to Cuba and back,
music works miracles don’t you think..
listen to Arsenio Rodríguez,
( do we hear Monguito
there ? ) 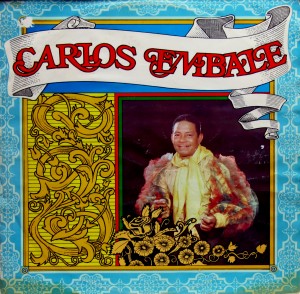 Rumba is pure Afro-Cuban music for only voices and percussion.
It began with harber workers singing and dancing in their spare
time in the docks of Havana and Matanzas, playing rhythms on
cargo boxes. It comes in three styles, Guaguancó, Yambú and
Columbia. Carlos Embale is one of the main performers of the
guaguancó style, enjoy this rare LP.