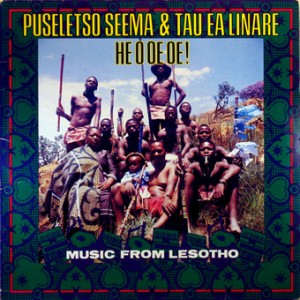 2010, the year of another World Championship of football, or
soccer if you prefer. This time the greatest tournament will take
place in South Africa. The whole continent and in particular South
Africa of course, shall benefit of all the extra attention an event
like this harvests. A good opportunity also to promote African
music worldwide, all eyes and ears shall be wide opened. Today’s
post concerns a group from Lesotho, a country completely surrounded
by South Africa that gained independence in 1966. In Globe Style’s series
‘Accordeons that shook the world’, this LP by Puseletso Seema & Tau ea
Linare. The singer Puseletso Seema and the group Tau ea Linare normally
work separate but made this LP for the occasion, a collaboration worthwhile
I’d say. Originally released in 1981, this is the 1985 re-release on Globe Style.
Sweet ‘South’ African music, enjoy He O Oe Oe ! ( say; hay o way way ! )