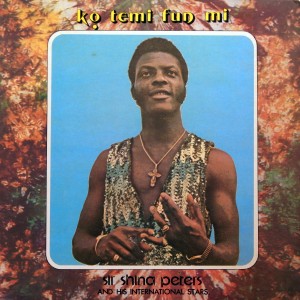 “With wealthy Nigerian backers, Sir” Shina Peters combined
juju with elements of Fela Kuti’s Afro-Beat style and the upfront
drum sounds of fuji music into a style he dubbed Afro-Juju.”
( Rough Guide )
This 1984 album on Makossa fascinates from beginning to end.
Sir Shina Peter’s afro-juju is full of surprising turns and sounds,
We had a ‘Sir Shina Adewale’ album in december 2008, here’s
the link to that album as well.
“Segun Adewale started out as a backup singer, with Shina
Peters, in the band of Prince Adekunle , a contemporary of
I.K. Dairo’s, before splitting off to form their own group
which they called, with no trace of irony,
Shina Adewale.” ( Rough Guide )