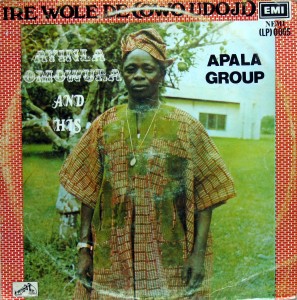 From the Nigerian Yoruba tradition, this music is called ‘Apala’.
It is based on drums and voice, I can’t seem to figure out
the difference between ‘Fuji’ and ‘Apala’. To me it sounds more
or less the same. Ayinla has a great voice, combined with smooth
talking drums this is awesome music. Enjoy Ayinla Omowura.