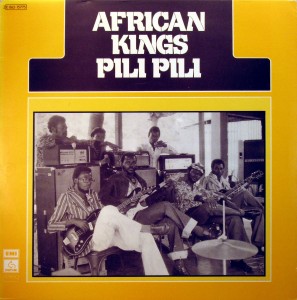 An album by a group I really don’t know much about.
Backsleeve tells us Loubassou Kifoueti Denis was born in
1948 in Brazzaville. He is guitarist, composer, singer and
arranger in this band. He started out in 1965 with a group
called ‘Congo Fiesta’. It lasted but a year and he moved on
with le Super-Tabé de Mindouli. This formation fell apart in
7 days but L.K. Denis did not get disencouraged and started
‘Manta-Lokoka’ with saxophone player ‘Pincky’ in 1967.
This orchestra lasted till 1971 when he formed ‘African Kings
Pili Pili’. It was in 1973 Loubassou Kifoueti Denis and his
African Kings Pili Pili returned to Congo from Libreville.
This LP is from 1976 and you don’t want to miss it.