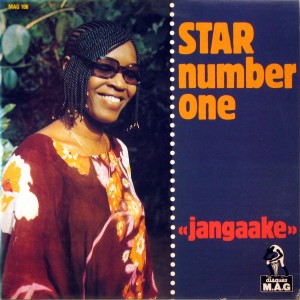 When I had already recorded and ripped this fine album
I found out my fellowblogger from Orogod posted it in december
2009. I even left a comment, a man’s memory fails once in a
while,..ehem. Anyway, I think it is an LP that deserves a little
more attention so I decided to post it nevertheless. This Bellot
MAG 106, comes with a different sleeve if that means something.
The musicians on Star Number One’s ‘Jangaake’ are; Papa Serigne
Seck, Yakhya Fall, Alioune Badara Diallo, Alioune Hane, Moustapha
N’diaye, Doudou Sow, Ali Penda N’doye, Thierno Kouate, Mamane
Fall and Papa Djibi Ba. Originally it was from 1976, I’m not sure
but I think this is a re-release, being on another label,
license Disques Griot, Aboubacar Touré.