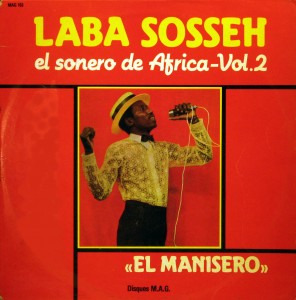 Last weeks post with Monguito contained a song by Laba Sosseh, today
an album by the man’s own hand. Laba Badara Sosseh, 12 March 1943,
Bathurst, Gambia – 21 September 2007, Dakar, Senegal.
The son of a Senegalese father and Gambian mother, Laba was born and
raised in Bathurst (renamed Banjul in 1973), the capital of The Gambia, a
British colony at the time. Regarded as one of the greatest musical
innovators in the Senegambia sub-region, he grew up listening to Cuban
dance music of the ’40s and ’50s. Johnny Pacheco was one of his favourites
and he became known for his perfect imitation of the Dominican bandleader’s
style. The rare French vinyl albums El Sonero de Africa (N’Dardisc) and
El Sonero de Africa Vol. 2 / El Manisero (Disques M.A.G.) compile
Laba’s early and mid-’70s recordings.
( info: Descarga.com )