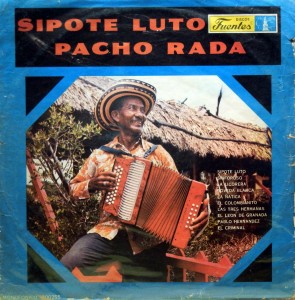 El Acordeon del Diablo.
A couple of years ago I discovered this little film at Youtube.
The story of Francisco ‘Pacho’ Rada made an unforgettable
impression and ever since I’ve been trying to find his music.
Shortly my buddy Sanjay came back from Colombia and
brought back this album which pleased me enormously.
The story starts with this rumour, a German ship full of
acordeons was told to be wrecked at the Colombian coast.
It is said that this is how the acordeon landed up at the
atlantic coast of Colombia where earlier they had only
made music using strings, rhythm and flute or gaita.
I was struck by the passage in which the old Pacho Rada
tells about his poverty despite all the songs he wrote.
Songs that made guys like Alfredo Gutierrez very rich,
Alfredo’s face speaks for itself when listening to the
poor old man. Hope you can follow a little Spanish,
enjoy watching and listening..to Francisco el hombre.
By the way, it is still unclear to me if there’s a link
between the old Pacho Rada and Pachito Rada Ortiz.
Check https://es.wikipedia.org/wiki/Francisco_el_Hombre
There is a lot of discussion going on about the true story,
one believes it, the other doesn’t, see for yourself..