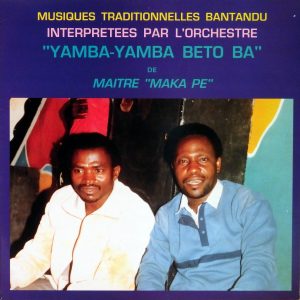 This is excellent electrifying traditional bakongo music (percussion, chant,
el bass, el guitar, likembé). A trance inducing groovy kind of proto Konono
nr 1 sound. Probably recorded and released in the eighties. It has 4 (long)
tracks which were featured before on a 10 track cassette release, on Babi
Production. “The group was founded in Kinshasa by Makengo Makape,
and has been together for several decades. Their sound is rooted in the
musical traditions of the Bantandu people, who are a subgroup of the Ba-
kongo. (The roughly 10 million souls who consider themselves Bakongo
are spread between the Democratic Republic of the Congo, the Republic
of the Congo, and Angola. The Bakongo are a blend of different peoples
who, over the centuries, have assimilated the Kongo culture and language:
an assimilation that started with political domination of the region by the
Kongo Kingdom in the 15th century. Some of the many Bakongo subgroups
are the Mayombe, the Bantandu, the Laari, the Vili, and the Bazombe-Kono-
no’s repertoire is based in Bazombe musical traditions. Each of these groups
speaks their own dialect of Kikongo.) The ‘Orchestre Yamba Yamba Beto Ba’s
grooves are built around the guitars of Maitre Makape and his colleague Lutum-
ba, with a Likembe holding down the bass, and embroidered by bells, rattles,
and percussion.” (Matthew Lavoie, VOA) (taken from Discogs)