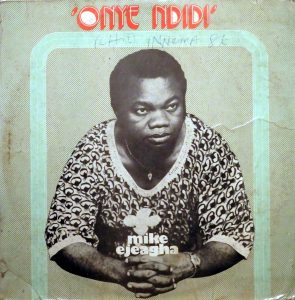 Life at oldage is quite enjoyable.
His numerous fans call him gentleman. But his name is
Mike Ejeagha. He is a folklore musician known for his
story telling prowess, using music. Infact, it is a slang
among the Igbos to say Akuko n’egwu Mike Ejeagha
to a story teller. His musical career started 56 years
ago as he watched two guitar players around his
compound at the coal camp Enugu in addition to
paying attention to anything musical.
As he learnt the guitar,
he was also playing read more

Mike Ejeagha, Nigerian story teller, made a big pile of records.
Until now we had some from the eighties, but today we go back
as far as 1975. he had his first successes in the sixties, hopefully
we’ll find those some fine day. Gentleman Mike Ejeagha was the
mentor of Celestine Ukwu, wonderful Igbo Highlife ..